In 1998 I had my first solo exhibition in London, the culmination of two years’ drawing at couture. Bruce Oldfield, the London based designer, came with Marie Helvin. Marie – along with Jerry Hall and Iman – was one of a triumvirate of supermodels who had dominated magazines and gossip columns throughout the 80s, when I was first taking notice of fashion. I had not planned to ask her to sit for me, but I did, and to my astonishment she said yes.

After a nervous false start the drawings turned out well. Marie, who has a radioactive address book, contacted her friends including Jerry, Iman, Catherine Denueve and Paloma Picasso to see if they too might consider sitting for a drawing.

It began a parallel role as a ‘fashion portraitist’, recording the industry’s most iconic faces, much in the way my idols Eric, Bouché and Antonio Lopez once did. The challenge, as with fashion drawing, is to say as much as possible with the greatest economy. 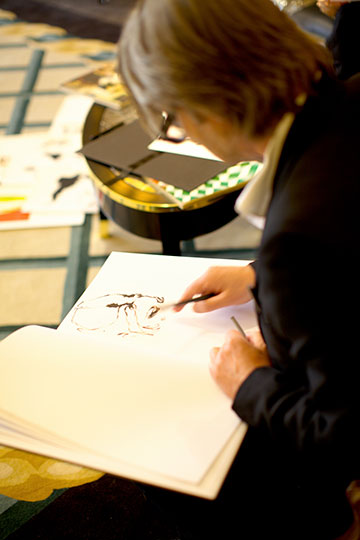