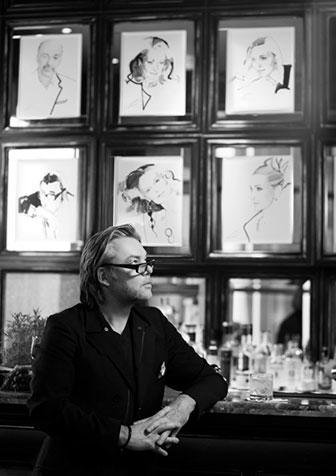 David Downton has been Artist in Residence at Claridge’s hotel in London since September 2011. The idea was the brainchild of the hotel’s Public Relations Director Paula Fitzherbert and the General Manager Thomas Kochs. Since then, some of the hotel’s most illustrious (and stylish) guests have sat for him. “There was a lot to live up to,” admits Downton indicating photographs of past guests Jackie O, Winston Churchill and Audrey Hepburn lining the lobby. “I wanted the drawings to be of the moment and at the same time to evoke an era when glamour went with gravitas and the world looked better in black and white.” Downton has also been working on a series of drawings using The Fumoir, with its dark, confessional atmosphere and original Lalique glass as a setting. He admits to being somewhat obsessed with the space: “Noon feels like midnight and midnight can stretch until noon.”